HOLLYWOOD – SpielBlog is a soup to nuts film by film rundown of Steven Spielberg’s film career by a world famous film critic.

Jaws was shown on ITV 8 October 1981, its UK television premier. A Saturday. I was 9 years old. 23 million others watched it the same night. Almost half of the UK population.

​The film made me jump – Ben Gardner’s head – made me a little sick – Quint spitting blood – and terrified me. I loved it. I still can’t swim in the sea without imagining the shark’s POV of my own thrashing legs. I read the Peter Benchley novel which was ubiquitous in all good bookshops and all the charity shops thereafter. The book has a Peyton Place soapy feel to it that the film thankfully jettisons. It was also the first time the director of the film was bigger than any of the stars. Of course by 1981, he’d also made Close Encounters of the Third Kind and Raiders of the Lost Ark, so his reputation was going through the roof. Roy Scheider, Richard Dreyfuss and Robert Shaw were familiar but hardly household names.

Just as with Duel Spielberg had taken a short story and turned it into a monster movie, so with Jaws he took a trashy novel and created art.

The basic premise is B-movie simple. A small town is terrorized by a killer shark. The first half of the film establishes the seaside town of Amity – ‘Amity, as you know, means friendship’ – as well as Chief Brody (Scheider) and his family and the local population pitted against the series of visits by the unseen Great White. As with Duel and Sugarland Express, American society is ill-equipped to deal with the menace. Has there ever been a better portrayal of venal political nearsightedness than Major Larry Vaughn (Murray Hamilton) and his refusal – supported by local businesses – to close the beaches?  The scene where he persuades an old man to take his wife and grandchildren into the water, despite their fear of the shark, is chilling in its portrayal of acquiescence. Here we have a villain who will die horribly; a bunch of children to protect and a sheriff who will rescue them in the end.   If the film had been written by algorithm. 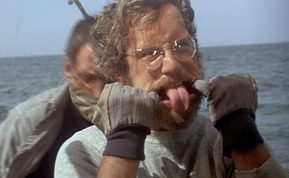 But Brody is the newcomer, the outsider, whose own wish to fit in renders him unfit to deal with the immediate danger. Hooper (Dreyfuss) arrives as the empowered outsider with both the expertise and the moral compass, and vitally the wealth, to place him above such petty concerns.  With Dreyfuss’ fussy, energetic performance, he almost seems to be outside of the film: a smart ass always on the verge of breaking the fourth wall.

And what is the shark? To begin with the shark is the camera. A POV searching for victims. The scene on the beach when the Kinter boy gets eaten – every shot suggests the question: ‘this one? or this one?’ For Slavoj Zizek the shark is the big other, the big fear. Essentially God. You face the shark and you are liberated from all your other petty fears – bureaucracy, marriage, career, politics all disappear when you look into those black eyes, doll’s eyes. 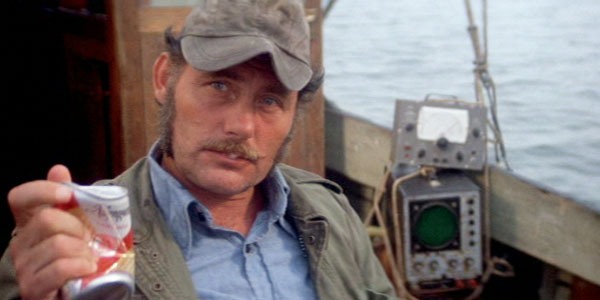 There was really no need for a Jaws II because the second half of the film is effectively a sequel. Like Psycho, this is a movie which effectively shifts genre halfway through. And we go from big to small – a cast of hundreds disaster movie to a three man version of Moby Dick. Just think for a second about all the plot developments that the film throws overboard. All the characters we have developed who we never see again. Brody’s family, Major Vaughn, the local businessmen and women – all gone, without a thought. The shark and the sea operate like a psychic eraser.

Not that we can relax. Once on the open sea, the tension that mounts – never have yellow barrels been so disturbing – is relieved with the high adventure of men trying to solve problems through doing things. John Williams’ justly famous score is as marvellous at underscoring the exhilaration as it is the danger.

The ending always struck me as silly. The more we see the shark, the less believable everything is. But on re-watching it for SpielBlog, I was amazed by how the ending is set up, almost from the beginning – air canisters in a shark’s mouth are glimpsed in a photo in one of Brody’s books – and how fleetingly the terrible rubber shark is actually seen. By the point Quint is disappearing into his maw, we’re so troubled by the death of dad that I don’t notice the effects.

Although Spielberg was introducing gore and sensation into family entertainment, it would have meant nothing if it wasn’t for the application of his subtler skills: how credibly he produces a portrait of family life, with the Brody children; the white picketed small town. His experience in the speed of television is transferred over to the big screen with his use of ‘oners’ – scenes filmed in a single shot, detailed below in a great YouTube video. And his willingness to use collaborators and allow them to contribute their work. Actors would improvise iconic lines -‘we’re going to need a bigger boat’ – John Milius would add the USS Indianapolis scene – Williams’ score of course and Verna Miles’ editing, which Spielberg himself credits with making the film a success.

The success of the film – widely regarded as ushering in the age of the blockbuster – meant that Spielberg now had the open door to Hollywood, he’d been angling for since he snuck off the Universal Studios tour bus and went and hid in the back lot. Once he’d turned down the sequel – at that time considered a cheap gimmick to be avoided – what did he want to do next?

SpielBlog by noted film critic John Bleasdale is also published HERE and will continue next week.