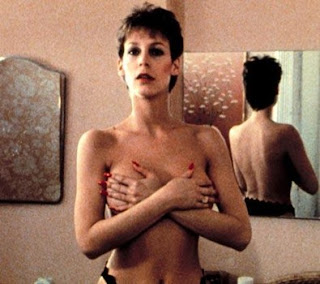 The Legend
Jamie Lee Curtis was born with both male and female genitalia.
The Truth
It’s none of your business. Why do you even care?
So what if she’s got a 12 inch cock. Or a 12 inch vagina for that matter. Would photographic evidence make you reassess your sexuality because you got an erection during her topless scene in Trading Places? Does the thought of a penis dangling a few inches below the most perfect tits in the known universe somehow sully their natural beauty? The fact of the matter is Jamie Lee, chopper or not, gave a generation of boys and girls a gift that goes beyond biological quirks. A gift that has been paused, rewound and replayed in billions of homes the world over.
Her breasts have influenced and continue to influence anyone who has been exposed to them and though many years have passed since that glorious day, sometimes I still find myself gazing wistfully at the moon, hoping against hope that she blesses us with another gratuitous boob shot. Sure she did it in the Tailor of Panama but the camera didn’t linger and the lighting wasn’t up to much and yes there’s a couple of blink-and-you’ll-miss-them moments in Blue Steel and Mother’s Boysbut compared to Trading, there is no comparison. In fact, I own a copy of a written confession which states that High Definition was invented just so the people behind the technology could see Jamie Lee disrobe in front of Dan Aykroyd in crystal clear vision.
It’s probably my favourite scene of all time and I’d stand on Lars Von Trier’stable with my boots on and say that.
(Visited 3,179 times, 2 visits today)