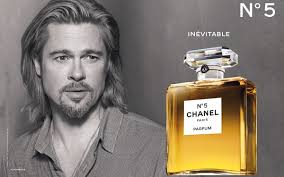 HOLLYWOOD – Movie star and activist Brad Pitt, admitted himself into the Betty Ford Clinic earlier today after revealing he has a long term addiction to overpriced scent.
Pitt, who recently starred in a bizarre advertisement endorsing Chanel No. 5, claimed that his poor delivery of nonsensical dialogue was a direct result of his perfume dependency.
“ I had a particularly savage hangover” said a jittery but fragrant Pitt.
“ I’d drank two bottles of CK One the night before and countless Davidoff chasers. When I woke up the next morning my head was pounding and I knew I had to be on set to film the commercial so I cracked open a miniature bottle of Chanel. Next thing I knew I’m stood in front of a camera reading from a teleprompter.”
Brad looked downcast as he revealed what happened next.
“ The director, Joe Wright could tell I was wasted. He said he could smell it on me as soon I entered the room and asked if I was ok to continue. I claimed I was fine and I read the lines as best I could but after we wrapped and I saw the finished advert. Well, let’s just say that was the moment I realised I had a problem.”
Pitt sensationally claimed that he was first turned on to cologne by Robert Redford whilst working on A River Runs Through it (1992).

“ I was just a young Kid in awe of this great actor . I asked him if he could give me any tips and he gave me a bottle of Old Spice saying he’d been using it for 30 years. I thought what the hell, if it works for Redford maybe it will work for me and so I went into the bathroom, took a couple of sips and the rest as they say is history”.
Pitt said that when he was consuming the cheaper Eau de Toilettes he had a handle on things but when his popularity grew and the money came rolling in, his addiction began to spiral out of control.
“ I was at a party doing Paco Rabanne in the toilets with Kate Moss when she offered me some Chanel No. 5. After I tried that no other brand could really compete.”
It’s rumoured Pitt will spend at least a month in rehab and the founder of Perfume Addicts Anonymous Gillian Staff, welcomed the actors decision to finally come clean.
“ Brad Pitt is a role model to millions and if his story can dissuade just one teenager from taking that first splash of cologne, he will have had a positive influence”.